Submitted by Lynne Long, Historical Society Board Member
It was more than 200 years ago that General Mad Anthony Wayne dragged his heavy equipment from Defiance along the Maumee River to fight the Battle of Fallen Timbers. It was this battle that led to treaties with the Indians and made it possible for Ohio to become a state in 1803. In 1814, during the War of 1812 with the English, General William Henry Harrison, later to become president of the United States, led his troops to defeat the English and their Indian allies. Tecumseh, a very important Seneca Indian chief, fought in this battle. Another major participant was an army engineer named Colonel Eleazer D. Wood, who designed much of the fort. Our county is named after this engineer.

In 1812, Thomas Howard, a Revolutionary War veteran, came by boat across Lake Erie from the East to the head of the rapids. He became the first settler of our village. His family walked through the woods of both Pennsylvania and Ohio to join him here.  Others came, too, and the town of Gilead was plotted in 1833.

Before Thomas Howard arrived, Peter Manor, a man of French descent from Detroit, had an established home across the river. He was a good friend of the Indians and they granted him a large plot of land. On that plot, the town Providence was platted in 1835 and it thrived with the canal business.  Providence met bad fortune with a terrible fire in 1846 and was completely devastated by a cholera epidemic in 1854. The most important structure remaining is the St. Patrick's Catholic Church, one of the oldest churches in the Toledo diocese.  St. Patrick's remains an active church to this day.

In 1838, Irish and German immigrants began digging the Miami and Erie Canal to create a very important water link for transportation and commerce. The first dam at the rapids was built to provide water for the canal town and a side cut was provided for Gilead.  Gilead's name was changed to Grand Rapids in 1868.

The coming of the railroads that crisscrossed the country spelled the end of the need for the canals. There was not much canal traffic after 1910, but some boats traveled the canal until the early 1930's.

The canal system had a series of locks.  Ours was lock No. 9. Some work was done on this canal during the WPA and the CCC days of the depression years of the 30's. One project was the building of what we call Bluebell Island.  Across the river, the Toledo Metroparks have restored the local part of the canal.  The side cut has recently been cleaned by the Village of Grand Rapids and the State of Ohio.

​South of Grand Rapids was a huge, very marshy area called the Black Swamp.  It must have been very foggy, muddy, and miserable.  Disease was rampant because of the hordes of mosquitoes. Traveling was almost impossible.  It was during the Civil War that draining of this area began so that roads could be built to carry the troops and material of war.

Grand Rapids in the first part of this century must have been a busy, active town.  It was easy to get to Toledo by railroad.  Ladies Aids and Sunday School classes were part of the social scene.  Literary and cultural groups, as well as card clubs, were established.  The Masonic Lodge, Eastern Star, Loyal Order of Moose, and Rebekah, with all their subsidiaries, were important organizations in town.

Local men went to France to save the world for democracy in World War I. Almost every man eligible at the time served in the Armed Forces in World War II.  Our men and women served in the Korean War, and in the 1960's the call was for Vietnam.  There has been an active American Legion since WWI.  Grand Rapids also has a VFW post.

In 1946, all 12 grades of school were in the former middle school building.  Neighboring schools were Tontogany, Haskins, Whitehouse, and Waterville. There were three good doctors in town and Joe Hampshire's drug store dispensed medical necessities.  We had three grocery stores - one a locker-freezer combination. The Grand Rapids Bank was on the ground floor of the Masonic building.  We had a movie theater, three churches, and the railroad was still used for freight.

Farmers and their families came to a lively town on Saturday night.  Farms still had cows, pigs, sheep, and chickens.  A Greyhound bus could be taken to Toledo, where passenger rail connections could be made.

Changes were slow, but sure, as many small northwestern Ohio towns began to have empty storefronts.  Grand Rapids was fortunate enough to keep a grocery store.  Phil Hock bought the pharmacy and Dr. Barger replaced Dr. Pilliod.  There was a Box Dry Good Store and gas stations.

By 1966, schools in our area had changed names to Anthony Wayne, Eastwood, and Otsego. A nice elementary building was in place, but the high school was very overcrowded.  Although the building was old, it was maintained and money was used wisely.  In the spring of 1967, the Grand Rapids school board made the decision to consolidate with Otsego.  Some citizens much against this decision were successful in calling for a referendum for the citizens to vote on this consolidation. The vote was to consolidate and the class of 1967-1968 was the last to graduate from the Grand Rapids School building.

Note: Today, Grand Rapids school children attend Otsego Schools in Tontogany. Both school buildings have been demolished and replaced with town parks.  The new fire station is also under construction at the site of the old High / Middle School.
For many of the citizens of Grand Rapids it is THE RIVER - spelled in capital letters!  There is an annual celebration of "when the ice goes out!". This is not just idle talk because most of the devastating floods have been caused by the jamming of the ice floes. When the winter is terrible and the ice is thick, the ice going out is a spectacular show... and the town breathes a collective sigh of relief, if there is no jamming of the ice.

In 1966, the whole scene of the river was sad, somewhat dead.  Two factors have helped clean it up - the Clean Water Act of 1972 made factories upriver do something about the pollutants they put in the river. The federal government also gave grants to villages to build sewer systems.  Grand Rapids received such a grant for $1,600,000 and in 1978 our sewer plant was completed.  The condition of the river is now much, much better. 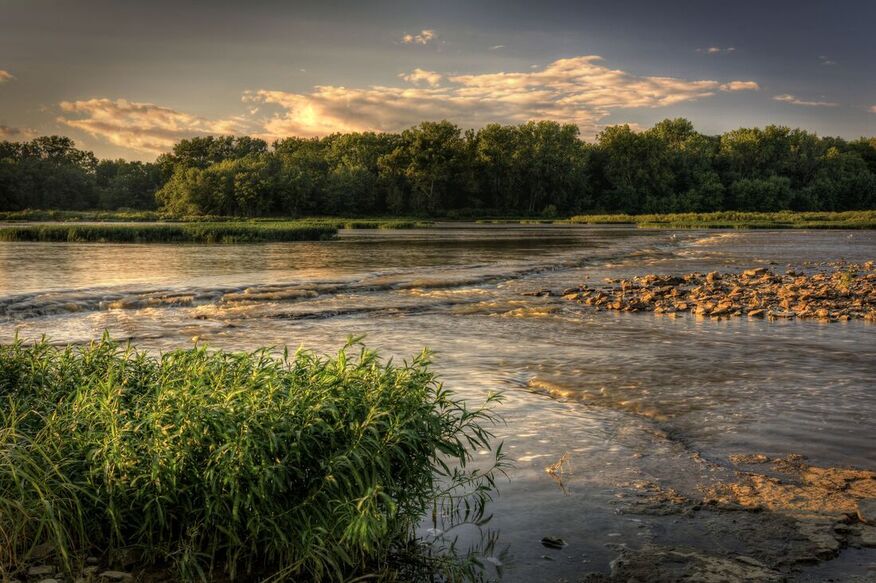 People have gathered at the head of the Grand Rapids of the Maumee River for centuries.  From the earliest inhabitants known here, the western Basin Early Woodland People, to the later American Indians, few could resist settling on the banks of the meandering Maumee River.  Easy accessibility by river and abundant fish and game provided a perfect home for Chippewa, Ottawa, and other Indian populations.  This section of the Maumee River was also the path of General "Mad" Anthony Wayne as he advanced his men and equipment from Defiance along the river to fight the Battle of Fallen Timbers, a decisive battle during the War of 1812.

Following excerpted from Grand Rapids, Ohio and Area, Commemorating the Past and Present, Volume One, July 1978, published by the Grand Rapids Historical Society in July 1978

In the fall of 1823, Ambrose Rice, who was county surveyor of Wood County, discovered this beautiful site for a village, and engaging himself with John Hollister they, on May 14, 1824, secured patent from the U.S. Government for the fractional quarter section, lying just at the Head of the Rapids, and upon which the original village was platted. When, however, the patents had been secured, Rice found other more pertinent matters requiring his attention; he quitclaimed to Hollister for consideration of $140 of his holdings.  Hollister retained the property until 1831, when he sold the unimproved property for $1200 to New Englander, John N. Graham.

Graham then set about the following year employing Lewis Bortle and Gabriel Guyer, farmers, to furnish equipment and clear that portion of land where the railroad depot stood on Third Street and the Kerr House site, for wheat and potato fields.

Mr. Graham proceeded to plat a town, christen it Gilead, and have it recorded in Vol. B., page 362 of the Records of Deeds in the Recorder's Office.  Ambrose Rice was credited with surveying the area in June, 1833, as follows:

Laid out on the south bank of the Maumee River at the Head of the Grand Rapids, on the northeast quarter of section 7 in township 5, north, range no. 9 east, in the County of Wood and State of Ohio, under the direction of John N. Graham, and surveyed by Ambrose Rice, in the month of June A.D. 1833, and protracted upon a scale of 100 feet to the inch; commencing at the intersection of a Cross on an interred stone at the northeast angle of lot 9 of section 5.  Description: The streets and allies cross each other at right angles and have their courses north 13 west and north 77 east; being run at the variation of 3.45 from the lines of the general survey of the township.  The streets are 80 feet wide, except Front Street which is 100 feed wide.  The lots north of Front Street are 55 feet wide and 100 feet deep, all of the lots south of Front Street are 50 feet wide and 150 feet deep.

John N. Graham reserved for himself the right to use 40 feet in breadth of Front Street opposite and adjoining the mill site for depositing lumber.  Provided, also that the view shall never be obstructed by building thereon; and that he reserves in like manner the right to turn the course of Shell brook, which passes over the plat, and conduct the same by the western boundary of West Street to the Maumee River.  There is also granted and conveyed to the purchasers of lots in Section 7 the right to use the mill race for warehouse purposed.

Signed, sealed and acknowledged in the presence of J.C. Spink.

In addition to the original plat of Gilead several subsequent additions were included - Spinks, West Addition, East Addition, Hinsdales and Callihan's - making boundaries that were to become the recognized village.

It was Dr. A.J. Gardner and Gabriel Guyer, Sheriff, who presented the petition to the commissioners on behalf of the residents of the town of Gilead asking that it be organized into an incorporated village to be called Grand Rapids. Poets had written so much on the unhealthy character of the Maumee Valley that it was resolved at a meeting held November 7, 1855, to call the river Grand Rapids River, and to give the bay and the valley the same name. The attempt failed.  In 1868, Gilead further took the initiative in carrying out the resolution by changing their name to Grand Rapids, again the other towns in the valley did not follow suit as expected.